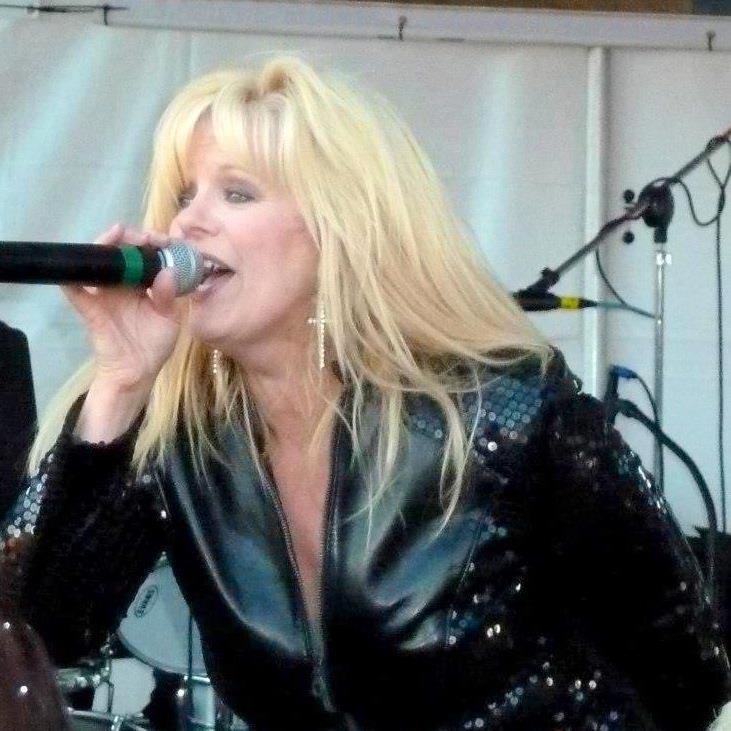 Cathy Slack is a rare combination of technical virtuosity and passionate performance. Our fans absolutely love what she brings to the band. Cathy's powerful lead vocals are a force of nature. She never fails to fire up the crowd wherever we play. Her show stopping tunes include "Proud Mary," "At Last," "When Will I be Loved," "Chain of Fools" and "White Rabbit."

Cathy is a proud fourth generation Santa Rosa/Sonoma County resident. A product of Santa Rosa City Schools, SRJC and Sonoma State, she studied vocal music in college. Cathy currently can be heard singing rock, country and blues around the North Bay with two bands, The Poyntlyss Sistars Rockin' Show Band and Stage Fright (as a longtime member of that band since 1991). After college, Cathy sang for four years in a band called Touch, with Mel Smith, covering oldies rock combined with a little country. Next, Cathy joined Stage Fright, where she found herself singing through two pregnancies (she will always remember the time she performed while five months pregnant in a Whoopi Goldberg pregnant nun costume)!! Cathy has performed with Stagefright at venues from San Francisco to Eureka, and over to the Sierra Foothills. In 1996, she wanted to explore the "New Country" music that was so popular and, with other Sonoma County musicians, Dave Locatell, Gary Kephart, Theresa Gutsche, Steve Taylor and a couple of keyboard players, formed Cathy Slack and the Cadillacs. From being one of the bands at the first year of "First Night" Santa Rosa, to their eight-year stint playing for Santa Rosa's Red, White & Boom 4th of July event, Cathy Slack and the Cadillacs played through 2001.

During the day, Cathy works for the North Bay's PBS TV affiliate and NPR radio affiliate, KRCB which is based in Rohnert Park, CA. She has a strong background in local radio and marketing, and a passion for working with non profits in her community. She is also very passionate about supporting public education, with her two children currently in public schools. After our recent shows at the Rohnert Park Friday Night Market (which Cathy helped produce), none other than Rohnert Park's Mayor Pam Stafford took the time to personally e-mail Cathy and thank her for bringing the Poyntlyss Sistars' music to her city.